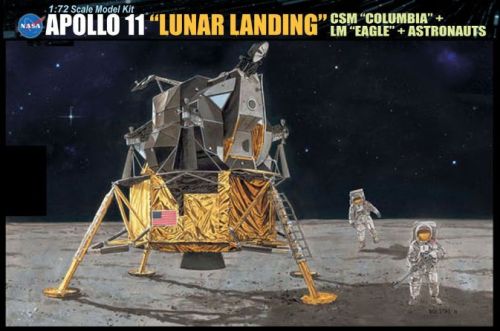 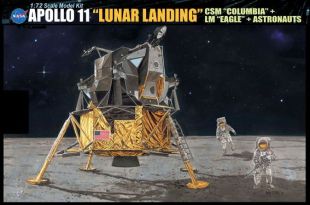 Dragon's new 1/72 scale collection of spacecraft kits has successfully blasted off! The second kit to be launched onto the market is also a depiction of the famous Apollo 11 craft. This time it shows the Lunar Module (LM), christened Eagle, which landed on the southern Sea of Tranquility on the Moon on July 20, 1969. This milestone event was watched by millions of TV viewers, and now modelers can recreate this very scene. The accurately detailed LM model can be displayed on a realistic dioramic base of the lunar surface. This base even includes details like footprints on the lunar soil! The inclusion of two newly tooled 1/72 astronauts adds to the dramatic scene that can be created instantly straight from the box.

The LM spent less than 24 hours on the Moon's surface, while the Command Module (CM) named Columbia orbited above. This kit also includes a 1/72 scale model of the CM and it can be displayed on its own display stand too. The CM even comes with photo-etched metal parts to replicate its antennas. The Apollo 11 mission was "one small step for man, one giant leap for mankind." Now modelers can commemorate this event with this stunning set of two Apollo 11 modules.