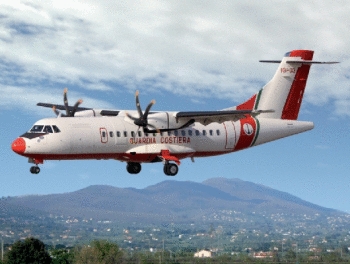 The ATR 42 was developed by the Italian-French manufacturer  “Aeromobili da Trasporto Regionale” and making its first flight in the middle of ‘80s. The goal of the project was to create a twin-turboprop passenger aircraft that could be used as short-haul regional airliner. The low operating costs and the possibility to take off and to land on short runways were the main features of the small aircraft and were the base for the commercial success of the project. The ATR-500, introduced in the mid ‘90s, was the improved version and it adopts new engines and six-bladed propellers. Furthermore a dedicated military version, the ATR 42 MP “Surveyor” has been developed to perform maritime patrol duties. It is used by Italian Coast Guard, Capitanerie di Porto and Guardia di Finanza.