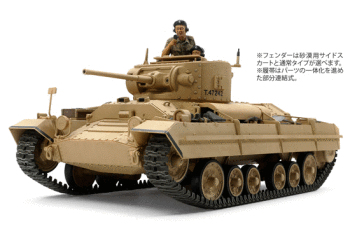 In the Nick of Time
The lighweight, compact Valentine was an infantry tank first deployed in 1940 by British forces. It came as a welcome addition for the beleagured British who had been forced into a desperate evacuation from Dunkirk, during which precious materiel had to be left behind. A total run of over 7,000 units (produced in Britain and Canada) made the Valentine the most prolifically produced British tank during WWII. The Mk.II/IV variant was equipped with the 40mm 2-pounder gun, and featured a 130 hp diesel engine as well as a "slow motion" coil sprung suspension system that gave it ample mobility for the infantry tank role. It débuted in November 1941 in North Africa, and was still serving in Tunisia, in May 1943. Valentines were also passed in significant numbers to the Soviet Union under the "lend-lease" program. They were used largely in reconnaissance roles.