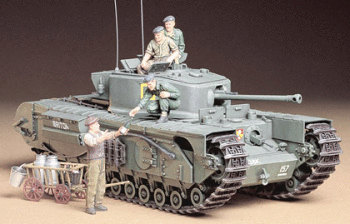 #T35210
$45.95
This item is currently Out Of Stock
Pre-Order Now and we will dispatch your order the moment it becomes available.
Scale 1/ 35 Brand Tamiya Overview

This is a 1/35 scale plastic assembly kit model of the British Infantry Tank Mk.IV Churchill Mk.VIII. Introduced at the end of 1943, the tank demonstrated its worth during the Normandy invasion while supporting Allied infantry units. The traditional form of the tank, including the unique suspension system with multiple small road wheels, has been faithfully reproduced. In addition, the kit comes with figures which depict a commander, gunner, driver, and a farmer. Furthermore, abundant accessories such as a cart and milk cans are also included to create a simple diorama.