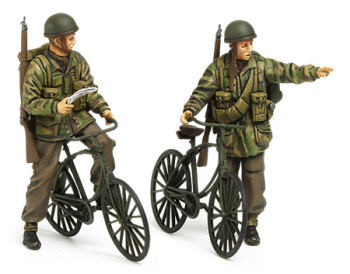 The bicycles are accurately recreated down to details such as spokes and saddle, while the handlebar and pedals are depicted faithfully using separate parts.

Bicycles can also be assembled in folded form, and used as accessories in vehicle models or dioramas. Each detailed figure has a choice of 2 head and arm types.

A complement of accessories such as haversack, water canister, pouch, Enfield rifles and more is included. The kit can be used independently to create a small-scale diorama.

While bicycles were used on all sides during WWII, British Army paratroopers were supplied with a unique lightweight version that could be folded along a pair of hinges in the frame center and carried.

Uniform The figures can be portrayed with maroon beret or compact paratrooper issue helmet, and are depicted in a camouflaged smock.