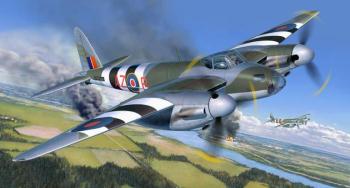 The Mosquito was one of the fastest and most powerful RAF bombers of the Second World War. Up until 1945 a total of 5500 of these aircraft were built. The lightweight Mosquito owes its success to the use of special materials for the basic airframe and the outer wing covering where mainly wood was used instead of aluminium. The prototype first flew on 25 November 1940, the Wooden Wonder then went into mass production. The Mosquito was faster than all of the German fighters. On 31.1.1943 three Mosquito bombers dropped their bomb-loads in the near vicinity of Reichsmarshal Goering as he wanted to take a parade in Berlin. They departed unhindered despite a huge number of enemy fighters being launched. Production was increased during the War and the Mosquito was also used as a fighter and for photo-reconnaissance inter alia, also in the U.S. Army Air Corps. Its maximum speed was 611 km/h (380 mph), range 3272 km (2032 miles). It could carry a maximum bomb load of 906 Kg (2000 lbs).