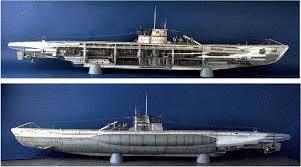 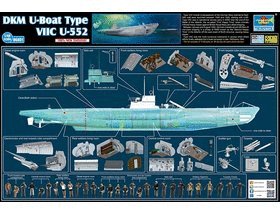 Type VIIC U-boat (Unterseeboot) of the German Navy submarine fleet. 568 craft were launched between 1940 and 1945, starting with U-69. Type VIIC was in operational service early in WW2 near the end of the Battle of the Atlantic, the so-called "First Happy Time" when U-boats inflicted heavy losses against British Royal Navy and allied shipping.

Between January and August 1942, German U-boats struck US Navy & merchant shipping in a phase of WW2 known as the “Second Happy Time” in the Atlantic off the east coast of North America, causing heavy losses.

Type VIIC was the most numerous submarine in service when Allied efforts finally defeated the U-boat campaign in late 1943/early 1944.