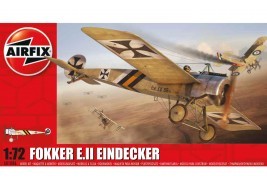 Significant in the history of aerial warfare, the Fokker Eindecker was the first purpose built German WWI fighter aircraft and the first to be fitted with gun synchronisation gear, which allowed the pilot to shoot through the arc of the propeller and in his line of sight.  Once introduced, it took a withering toll of Allied aircraft.

The technical developments incorporated in the design of the Fokker E Series of armed scouts, allowed German pilots to fire their guns along their line of sight and made attacking another aircraft much easier – significantly it gave them a much higher possibility of securing a victory. This proved to be a huge advantage for Luftstreitfrafte pilots and led to a period of air superiority for the Germans in the air battles over the Western Front.

In a period of the war known as ‘The Fokker Scourge’ by Allied pilots, the Fokker Eindeckers enjoyed great success against their adversaries, who became so dismissive of the capabilities of their own aircraft, they would often describe them as being nothing more than Fokker fodder!  Famous names such as Oswald Boelcke and Max Immelmann were to score a significant number of victories whilst flying the Fokker Eindecker.