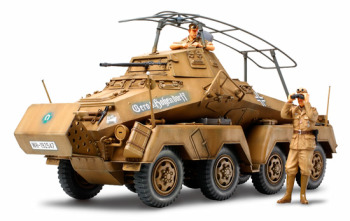 The Eyes of the Desert During the first half of WWII, German reconnaissance units greatly used the Sd.Kfz.231 series Heavy Armored Car. Above all, the Sd.Kfz.232 was equipped with a long distance wireless radio also having a unique large-sized frame antenna. It also came armed with a 2cm main gun and a MG34 machine gun mounted on its turret. The 8-wheeled Sk.Kfz.232 had an on-road top speed of 90km/h, featured elaborate front and rear driving positions, and a superb 8-wheel drive system. Because of the Sd.Kfz.232's excellent design and maneuverability, it came in very handy serving as the eyes of the German Army throughout Europe, Russia, and especially showed its full potential in the vast North African deserts.

About the Model This is a 1/35 scale plastic assembly kit model of the German 8-Wheeled Heavy Armored Car Sd.Kfz.232 which was mostly seen with Africa-Corps specifications. Length: 193mm. Adding to the high level of realism to this model is this car's unique large-sized frame antenna. The complicated suspension for the 8-wheel drive, 8-wheel steering is also rich in detail. Included is a metal gun barrel and photo-etched parts depicting parts such as the small hook and light guards look great on the large-sized hull. Variety of tools and equipment provide a sharp finish. Further enriching the model are early war type jerry cans and miscellaneous parts. Wearing tropical uniforms are two included figures, a standing officer figure and for the turret a commander figure (upper torso). Kit includes four kinds of decals: North African Front (2), Balkan Front (1), and the Kursk Front (1).