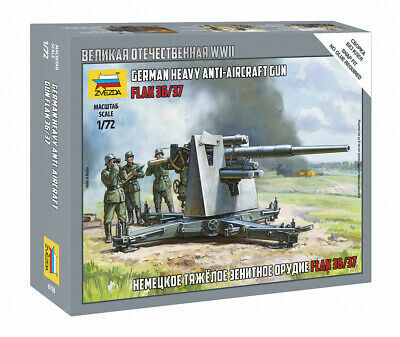 The 88mm Flugabwehrkanone 36 and 37, or Flak 36 and Flak 37, was one of the best anti-aircraft and anti-tank guns used by any country during World War II. The Germans affectionately referred to this big gun by its size: Acht-acht or eight-eight. Though this powerful weapon took more than two minutes to deploy into firing position, it's ability to destroy enemy aircraft and tanks became legendary. Altogether, more than 20,000 of these excellent guns were constructed. The Flak 36 and 37 were almost identical (the Flak 37 featured updated instruments and targeting gear), and had interchangeable parts. While it was originally designed for use against aircraft, the high muzzle velocity and heavy weight of the 88mm shell, combined with an ability to depress the muzzle all the way to horizontal (unlike most AA guns of the time) made it an excellent anti-tank gun as well. It could even fire high-explosive shells against ground troops and fixed installations, making it a very well-rounded weapon system. Contents: 4 unpainted soldiers 1 anti-aircraft gun - 1 unit base with flag - 1 unit card