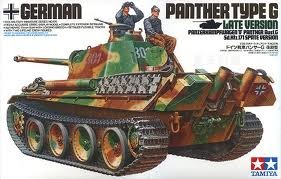 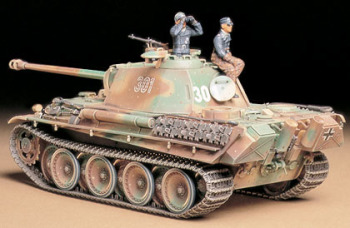 Because of its many advanced and innovative features, the World War II German Panzerkampfwagen V, known as the "Panther" tank, is still considered by many ordnance experts as a weaponry masterpiece. The development of the Panther came about due to the successes generated by the Russian T-34, which has become a serious threat to the German forces during the mid part of the conflict.

Mass production of the Panther began during the spring of 1943, and with its sophisticated mechanics and powerful Type 42 L70, 70mm main gun, the Panther tank demonstrated its formidable strength during front line action shortly after its introduction. Several improvements were suggested following its initial employment, resulting in the Panther Type G, which began to appear in spring 1944. Major improvements consisted of additional side armor slope angles and simplified assembly refinements for mass production. Early version model of the G type had a semi-cylindrical main gun mantlet which resulted in a shot-trap due to its shape. Shells were deflected downward through the hull or into the turret causing serious damage.

This was improved on the late version model by adding a vertical lip on the lower end of the mantlet. A modified engine room deck with an improved air intake grille and ventilator housing are some of the other distinctive exterior features seen on the late version type G Panther.