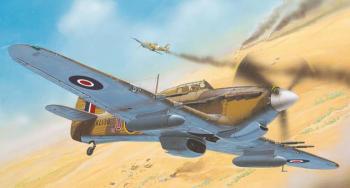 The Hawker Hurricane achieved its greatest successes in 1940 in the Battle of Britain and was active in all theatres of war. Heavily armed with 20 mm cannon the Mk IIC version could also be equipped with bombs and auxiliary tanks. In total over 4,700 of the Mk IIC were built.