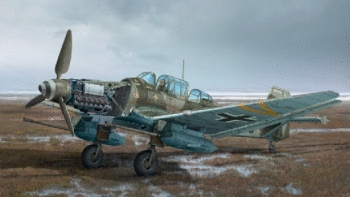 #ITA 2722
$49.95
This item is currently Out Of Stock
Pre-Order Now and we will dispatch your order the moment it becomes available.
Scale 1/ 48 Brand Italeri Overview

During the beginning of World War II the dive bomber JU-87, better known as “Stuka”, was extensively used by the German Air Force in its campaign against Poland. It proved to be inadequate for the Western war theater and was subsequently used as support aircraft for the German ground forces at the Eastern front where enemy fighter planes were much less of a threat. Due to exceptional capabilities of the Stuka’s pilots the aircraft became a legend. The G-2 version had two 3.7 cm anti-tank guns and was mainly engaged to fight the large numbers of soviet armoured divisions.