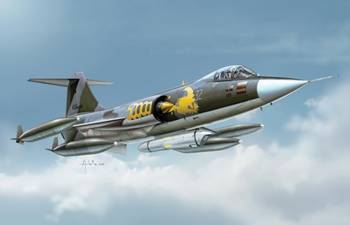 #ITA 1296
$22.95
This item is currently Out Of Stock
Pre-Order Now and we will dispatch your order the moment it becomes available.
Scale 1/ 72 Brand Italeri Overview


The Lockheed F-104 Starfighter is one of the most famous fighter in aviation history and is also one of the longest-running with a working life began in the late '50s and ended, for some air forces, the mid-2000 . Airplane single aerodynamic structure with stretched fuselage and wing surfaces is extremely limited.

Its structure makes it ideal as an interceptor capable of passing through the engine thrust General Electric J79 turbojet, Mach 2.2 with an extraordinary rate of rise in altitude. But it was very maneuverable and hard to manage.

The F-104G Starfighter was produced under license from several European aviation industry. E 'became, as the mid-'60s, the interceptor reference of many NATO countries including Italy, Germany, Holland, Greece and Turkey. The armament was essentially that of the original versions with a 20 mm Vulcan cannon. and the ability to deliver under the wings of air-air missiles, bombs or additional fuel tanks to increase its flight range. The traditional task of interceptor was joined also to scout.