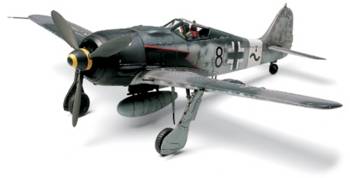 #T61095
$41.95
This item is currently Out Of Stock
Pre-Order Now and we will dispatch your order the moment it becomes available.
Scale 1/ 48 Brand Tamiya Overview

In 1944, as the U.S. began their long range strategic bombing campaign in earnest with heavily-armed B-17 and B-24 bombers, the Luftwaffe developed the specialized "bomber-killer" R2 variant of the Fw190 A-8. Tamiya now brings you this formidable fighter in the 1/48 scale, and with all the parts included in this kit you can choose to build either the R2 variant or the A-8.

The Focke-Wulf Fw190 was one of the Luftwaffe's best front-line fighters of WWII. Of all the different variants, the A-8 armed with four 20mm cannon and two 13mm machine guns was the most widely produced. A sub-variant of the A-8 was the R2, which had two of the 20mm cannons replaced by more powerful 30mm guns and added armor protection for its role in attacking the giant 4-engined Allied bombers.