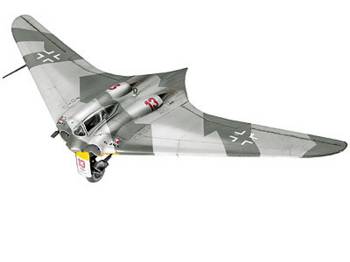 By the end of World War II, the brothers Reimar and Walter Horten were two of the best-known designers of flying wing aircraft in Germany. They brought their experience in this field into a special unit which, as Sonderkommando 9, was responsible for the development of tailless all-wing aircraft. The development of the machine known as the Horten Ho IX, equipped with two BMW 003A-1 jet engines began in 1942.

Whereas the first machines could only be made as gliders due to difficulties with the jet engine, the second prototype received a Jumo 004B-1 engine. In 1944 the V2 made its first flight reaching speeds of over 780 km/h. The production of the Horten was transferred to the Gothaer Waggonfabrik and the designation was changed to the Go 229. The first machine from the Gothaer Waggonfabrik, the Go 229 A-O V3 received a Jumo 004-C engine.