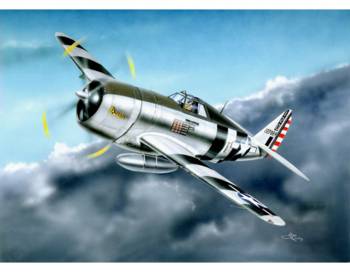 The P-47 was a big (7 Ton) and very powerful high-altitude fighter, commonly called "the Jug".

The project started from 1939.

And Deliveries started late in 1942. A total of 15683 this US fighter aircraft was built in WWII.

For early the P-47 Designed as an interceptor, but later it proved to be an outstanding combat plane both in bomber escort and ground attack duty.

Its great structural strength and massive radial engine that could withstand damage better than the other plane. P-47D.

This model was the major production version, and 6,315 were built.