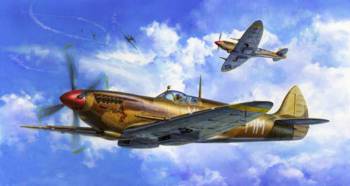 #T60320
$219.00
This item is currently Out Of Stock
Pre-Order Now and we will dispatch your order the moment it becomes available.
Scale 1/ 32 Brand Tamiya Overview

The Spitfire Mk.VIII was developed to succeed the MK.V and was powered by a Merlin 60
engine. It also included many new improvements such as an enlarged rudder, shortened
ailerons, a retractable tail landing gear, and fuel tanks installed at the leading edges of the
wings. The Mk.VIII finally went into service in the summer of 1943, after the deployment of
the stop-gap Mk.IX.

The Mk.IX mostly saw action throughout Europe whereas the Mk.VIII was sent to other
fronts such as the Mediteranean and the Pacific. As well as fighting against both the Luftwaffe
and the Italian air force in North Africa and Italy, the Mk.VIII also proved itself against the
Japanese Zero in battles over China/Burma/India as well as Australia.

The new features which were designed for the Mk.VIII were also used by the Mk.IX , and
were incorporated onto later Spitfire variants such as those powered by Griffon engines. It
can be said that the Mk.VIII was the foundation on which later model Spitfire aircraft were built upon

-This is a 1/32 scale plastic assembly model kit of the Supermarine Spitfire Mk.VIII.
-The famous form of the Spitfire including its smart fuselage and the beautiful teardrop
wings are accurately remodeled.
-The model features a detailed riveted surface.
-The retractable tail landing gear, shortened ailerons, and fuel tank positioning which are
famous features of the Mk.VIII Spitfire are accurately remodeled.
-Parts to depict the extended wingtips of the Mk.VIII early production model are included.
-The wing with its two 20mm cannons and four 7.7mm machine guns is faithfully reproduced.
-You can choose to depict your model with the main landing gear in either stowed or
deployed position. Parts with built-in magnets also allow you to depict the tail landing gear
in either stowed or deployed state.
-Display stand to depict the Mk.VIII in flight included.
-The details of the Rolls Royce Merlin engine including oil tanks, and supercharger have
been faithfully remodeled. Engine cowlings are removable.
-Movable elevators, rudder, and ailerons. Flaps can be depicted in up or down position.
-Parts to depict 30 gallon and 90 gallon fuel drops tanks included.
-One seated and one standing pilot figure included.
-Markings to depict the Mk.VIII flown by the U.S. air force, RAAF, and Canadian air force
included (Total 3.). Canopy masking stickers included