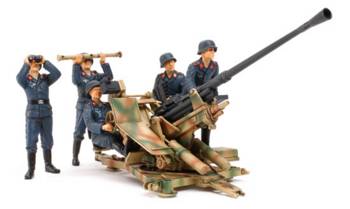 #T35302
$41.50
This item is currently Out Of Stock
Pre-Order Now and we will dispatch your order the moment it becomes available.
Scale 1/ 35 Brand Tamiya Overview

The 3.7cm FLAK37 was one of the most significant German anti-aircraft guns used by the German forces during WWII. Each clip contained 6 rounds and it could fire a maximum of 160 rounds per minute, or 80 rounds per minute at the normal rate.

The FLAK37 was deployed to many fronts to defend airspace, and in the latter half of WWII it was also used in the anti-tank role armed with armor piercing shells. In addition, many FLAK37’s were mounted onto 8-ton Sd.Kfz 7/2 half-tracks and used as mobile anti-aircraft guns.

1/35 scale plastic assembly kit which features the German 3.7cm FLAK37 anti-aircraft gun and 5 crew figures in Luftwaffe uniforms. The gun barrel features sliding forward/reverse, elevation/depression, and swiveling movement actions. Includes a trailer to depict the gun in a towed position. The clip can be assembled with either high explosive or armor piercing shells. Includes parts to depict the stick projectile type 42 ordnance. Figures such as a commander with binoculars, a spotter with rangefinder, gunner, and 2 loaders are included to create a diorama of the crew getting ready to attack the incoming enemy aircraft.