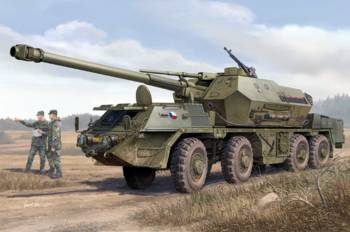 
br>
The Dana was developed in the late 1970s by ZTS for the Czechoslovak army, instead of purchasing the Soviet 2S3 Akatsiya. It is based on the Tatra 815 (8x8) truck, and was accepted for service in 1981.

By 1994, over 750 units had been produced. The driver and commander are seated in the front cabin. The turret consists of two halves, with the gun mounted in between.

Turret traverse is limited to 225 degrees to either side, due to cables. The gun has a fully automated loading system. All the optics are located in the left half of the turret. The gunner and loader operator are on the left, the ammo handler is on the right side, which also has a DhSK on the turret roof.

There are 60 projectiles in the turret and chassis. The Dana is currently in service with the Czech Republic, Libya, Poland, Russia, and Slovakia.