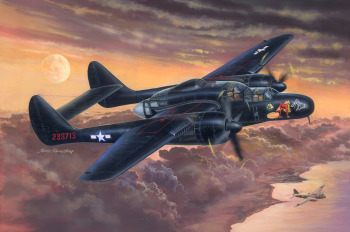 Since the Air Force of each country started pay their attention on the night bombing,the bombing became more effective than ever.To fight against the night bombing,a series of night fighter were put into use.The American start their night fighter program on 1940.The Army use the P-70 Havoc and Beaufighter to fight with the Japanese until the first 45 P-61 Black Widow were in active service on October,1943.

With the born of the more powerful Airborne Intercept radar, the SCR-720C,the P-61s of the Army began their upgrade to instal this lastest radar.The new type Black Widow with the SCR-720C were designated as P-61B.The type B length the nose section and reintroduced the dorsal turret on the late production.