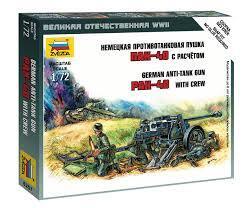 Development of Pak 40 gun started in 1938, however, since the gun didn't fit the "blitzkrieg" concept, it went on rather slowly. The gun was finally adopted for army service in the end of 1941, when both failure of "blitzkrieg" and incapability of smaller German guns to damage soviet tanks T-34 and KV became evident. Pak 40 gun had a greater firepower than its Soviet counterpart, the ZiS-3 gun, but it was far less mobile and more expensive to produce. Contents: 3 unpainted figures 1 anty-tank gun -