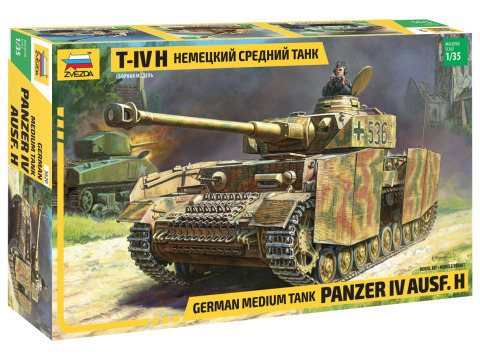 The German medium tank Pz.Kpfw. IV was the most produced German tank of the Second World War, it was in production from 1937 to 1945, and underwent several steps of improvement . Ausf'hrung (Mark) H is one of the better know variants and one of the more interesting ones. Due to typical protection skirts (Sch'rzen) mounted on the sides and the perimeter of the turret, the tank has acquired a typical look and was often mistaken by Soviet soldiers as the heavier T-VI "Tiger". The resemblance was so close that for a long time in the Soviet Army, this tank had the designation "Tiger" type 4. On the Eastern front, Ausf. H made its debut during the operation "Citadel" (Battle of "Kursk") and played a crucial role in the events that followed. The Panzer IV became the mainstay of the German Panzer divisions. It should be noted that the Panzer IV H was at that time the only weapon able to fight Soviet T-34's anfd KV-1's. The 1943 introduced Tigers and Panthers were not yet available in high enough in numbers to make an impact on the front . Generally the Ausf. H can be called the top of German medium tanks , and all subsequent Panzer IV modifications were made to reduce cost of production.