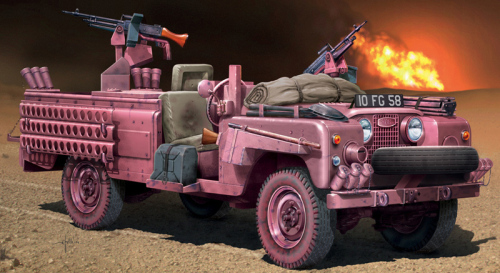 #ITA 6501
$17.95
This item is currently Out Of Stock
Pre-Order Now and we will dispatch your order the moment it becomes available.
Scale 1/ 35 Brand Italeri Overview

The "Land Rover" was certainly one of the most famous symbols of "Made in England" on four wheels and is a real milestone in the history of the off road vehicles. Born after the war, with the first prototypes done in 1947, to meet both civilian and military tasks. Inspired, though not directly, to the American Jeep, was characterized by a 4x4-wheel drive and a strong and reliable frame to tackle, with success, the most difficult and demanding trails. The 109 inches "long wheel base” version has been used by British Special Air Service starting from the second half of ‘70s. During the operations in a desert environment the Land Rover took the typical “pink panther” camouflage color. That’s the reason why of nickname “Pinkie” assigned by S.A.S. members to it.