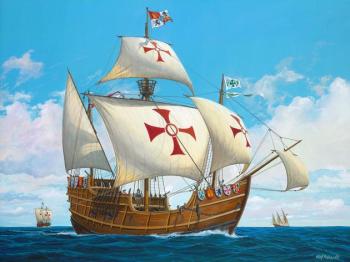 #95 05405
$58.95
This item is currently Out Of Stock
Pre-Order Now and we will dispatch your order the moment it becomes available.
Scale 1/ 90 Brand Revell Overview

The Santa Maria was a typical merchant vessel of the 15th century. Except for Noah's ark, she is undoubtedly the best known ship in the world. On September 9, 1492 Christopher Columbus set sail from the Canaries in search of the westerly sea route to India - on a voyage that was to become one of the greatest voyages of discovery in history. He chose the Santa Maria as the flagship of his little fleet. With 100 tons and a crew of 52, she was the biggest of the three ships. After an arduous voyage, on 12 October, Columbus at last reached Watling Island in the Bahamas, believing it to be one of the islands which are set down in the maps at the end of the Orient . On a subsequent reconnaissance trip the Santa Maria ran aground off Haiti. Her wood was ultimately used for the construction of a fort.