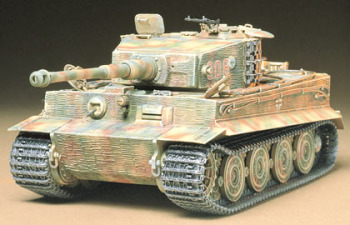 #T35146
$59.95
This item is currently Out Of Stock
Pre-Order Now and we will dispatch your order the moment it becomes available.
Scale 1/ 35 Brand Tamiya Overview

Features of the late production variant of the Tiger I, including the distinctive silhouette, the powerful 88mm gun, periscope on commander's cupola, and pressed steel wheels, have all been realistically reproduced. In addition, shell loading area in the turret as well as hatch undersides have detailed finish. Kit includes two types of gun barrels and gun mantlets to enable to build the last production variant model. Furthermore, one commander figure also included.