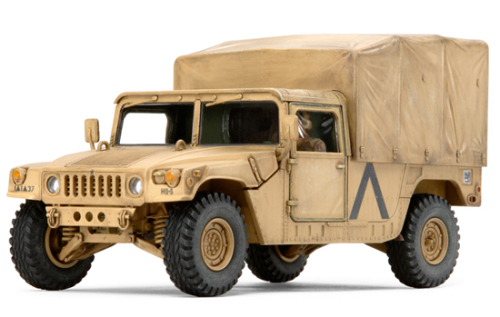 【 Securing the Way 】 First appearing in 1985, multi-purpose vehicles have been used by various U.S. military units. Depending on the body type and fitted equipment, they can also perform a wide range of roles. Among these vehicles, the cargo carrier type has the greatest number of productions and is greatly used in cargo/troop transport duties. This vehicle can carry maximum 1,100kg of supplies or 8 fully-armed soldiers on the large rear cargo area. Featuring superb durability and off-road performance, it has been deployed to units around the world and supports U.S. military operations.

【 About the Model 】 ★1/48 scale plastic assembly kit model of the U.S. Modern 4x4 Utility Vehicle “Cargo Type.” Length: 99mm. ★The simple form of the car with the rear cargo has been reproduced in a compact 1/48 scale. ★Canvas cover on the rear cargo features realistic surface texture. Flap can be assembled in either open or closed position. ★Separate window parts on the canvas doors. ★Realistic suspension area. ★Rubber tires with realistic tread pattern. ★1 driver figure and 3 kinds of markings included.