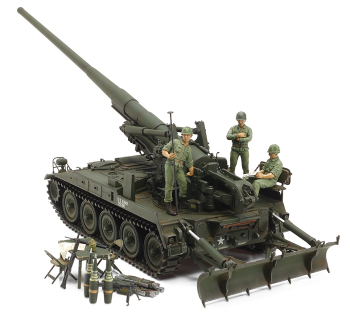 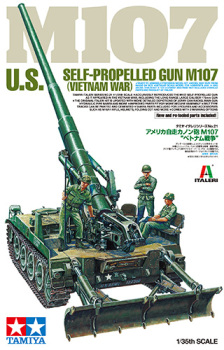 A Long Ranger
Development of the M107 self-propelled weapon began in 1956; five years later in 1961 it was officially procured by U.S. forces, and in 1965 it was thrown into action in the rapidly-escalating conflict in Vietnam. The long-caliber 175mm gun gave the M107 a then peerless range of 32km, and it was mounted on a lightweight open-top hull to allow airlifting. The rear of the 5 man-crewed vehicle was fitted with a hydraulic spade. One of its more notable actions in the Vietnam War was during the Battle of Khe Sanh in 1968, as U.S. troops took advantage of its exceptional range to fire on North Vietnamese Army positions across the Demilitarized Zone in defense of the precarious position of the Khe Sanh Combat Base. After the U.S. withdrawal and up until the fall of Saigon in 1975, M107s continued to fight in the hands of South Vietnamese Army forces.

About the Model
★This is a 1/35 scale plastic model assembly kit. ★Length: 375mm, width: 91mm. ★The classic Italeri kit gets an update, with more detailed depictions of jerry can racks, main gun hydraulic pipe connections, plus bolts and more! ★Vinyl tubing is used to recreate the hydraulic pipes themselves. ★Improved parts fit for a more detailed and secure build. ★Realistic belt type tracks can be painted and cemented. ★Comes together with Tamiya parts to recreate M16A1 rifle, other accessories, and 3 crew figures. ★2 marking options depict M107s deployed in the Vietnam War.
★Vehicle parts are a product of Italeri.