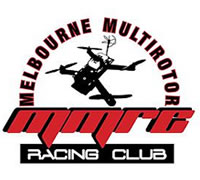 The Melbourne Multirotor Racing Club Incorporated (MMRC) was formed on July 29th 2015 after it was confirmed that their first official racing venue (GoKarts) would be available on a monthly basis.

The MMRC then was incorporated on the 9th of October 2015 turning the club into a legal entity thereby allowing to to become affiliated with the national body MAAA and seek insurance coverage for it's members.

The membership base is made up of several flying groups who meet up around town at various times who come together to race, socialise and fly!