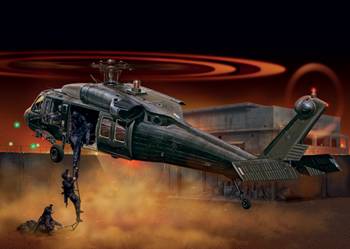 The Black Hawk is the Army’s front-line utility helicopter used for air assault, air cavalry and aeromedicals evacuation units. It is designed to carry 11 combat-loaded air assault troops and it is capable of moving a 105 mm. Howitzer and 30 rounds of ammunition.

First deployed in 1978, the Black Hawk’s advanced technology makes it easy to maintain in the field.