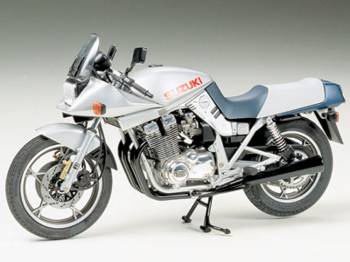 #T14010
$21.95
This item is currently Out Of Stock
Pre-Order Now and we will dispatch your order the moment it becomes available.
Scale 1/ 12 Brand Tamiya Overview

Making its exciting debut in 1980 at the IFMA trade show in Cologne, Germany and later released to the public in 1981 was the Suzuki GSX1100S Katana. The aggressive form of the Katana designed by Hans Muth now comes reproduced as a plastic assembly model kit.

The mechanical mood of the 4-cylinder DOHC engine, along with ignition cords, brake pipes, and instrument cables which are reproduced with vinyl piping, has been precisely captured. In addition, metal screws are included to provided extra strength to parts such as the wheel axles.