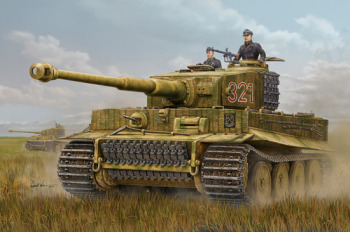 #HB 82601
$142.95
This item is currently Out Of Stock
Pre-Order Now and we will dispatch your order the moment it becomes available.
Scale 1/ 16 Brand Hobby Boss Overview

This well-known German tank was an answer to the unexpectedly formidable Soviet armour encountered in the initial months of the Axis invasion of the Soviet Union, particularly the T-34 and the KV-1.

The Tiger I is the first tank mounting the 88 mm gun, in its initial armored fighting vehicle-dedicated version, which in its Flak version had previously demonstrated its effectiveness against both air and ground targets. During the course of the war, the Tiger I saw combat on all German battlefronts.

It was usually deployed in independent tank battalions, which proved to be quite formidable. While the Tiger I was feared by many of its opponents, it was over-engineered, used expensive and labour intensive materials and production methods, and was time-consuming to produce. Only 1,347 were built between August 1942 and August 1944.