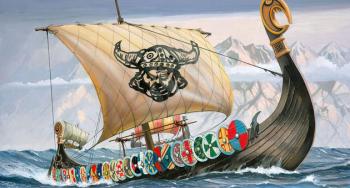 #95 05403
$52.95
This item is currently Out Of Stock
Pre-Order Now and we will dispatch your order the moment it becomes available.
Scale 1/ 50 Brand Revell Overview

From the end of the eighth century AD, Vikings originating from Scandinavia regularly appeared in Great Britain and on the European mainland on raiding expeditions in their Longships. These highly sea worthy fighting ships of around 20 metres (66 feet) in length had a bow at both ends, enabling them to beach and/or launch in either direction. The shallow draught of only 1.5 metres (5 feet) also gave the Vikings the option of sailing or rowing up inland waterways and rivers, allowing them to raid areas deep in the hinterland. With these fast (a speed of 20 knots) and very manoeuvrable fighting ships also known as Dragon Boats , the Vikings ventured as far away as Iceland, Greenland and even North America, as excavations at settlements have proven.