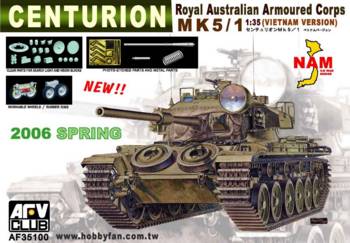 The Centurion tank was first developed by the British and served as the British Main Battle Tank after the Second World War. The first batch of Centurion Mk. I were completed and delivered to the British Army in 1949. This first batch of Mk.I adopted the 17 pounder main gun was powered by a Rolls-Royce engine and had Christie suspension. However from the Mk.III model onwards; it adopted the 20 pounder main gun. The Mk.III participated heavily in the Korean War and by the conclusion of it; there had been 13 different variations of the Centurion in total.

As a Commonwealth member the Australian Army placed an order for a batch of Centurion in 1949 however due to the outbreak of the Korean War the order was never delivered until 1952. Along with the later orders and upgrades all Australian Centurions were subsequently upgraded to the Mk.5 standard by 1961. From 1967 the Australian Army once again upgraded their fleet of Centurions to the Mk.5/1 which came equipped with infrared night vision systems for the commander driver and aimer.

From 1968 to 1971 the Australian Army sent out 3 Centurion Mk.5/1 companies to provide armoured support to the troops fighting in the Vietnam War. Since then the Centurion has been adopted by many different countries Israel Sweden and Singapore to name a few. The Centurion currently enjoys a very long and illustrious 60 year career in active service becoming one of the greatest modern tanks in history.