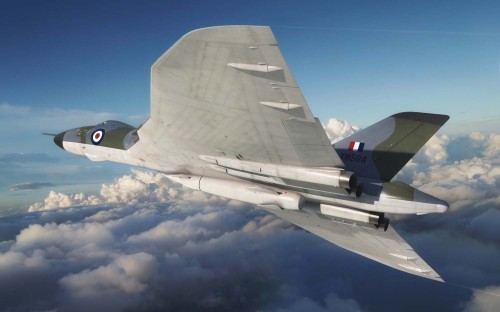 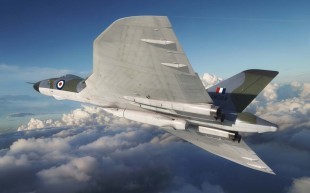 Occupying a significant position in the history of post war British aviation, the Avro Vulcan was without doubt one of the most distinctive aircraft ever to take to the skies, with its huge delta wing profile becoming almost as iconic as the elliptical wing of the Supermarine Spitfire.

Built to satisfy an extremely demanding Air Ministry requirement for a fast, high altitude strategic bomber, capable of carrying a ‘special’ payload of 10,000 imperial pounds in weight (a nuclear device), the new aircraft was intended to serve as an airborne deterrent to any future military threat against the UK, with the required specifications representing a 100% increase in the capabilities of any previous British bomber aircraft.

When the Vulcan made its maiden flight in August 1952, the Avro team were well on the way to presenting the Royal Air Force with not only the world’s first delta bomber, but also one of the world’s most effective strike bombers. Interestingly, all this was achieved just nine years since the Avro Lancaster’s of RAF No.617 Squadron had launched their famous raid against the great dams of the Ruhr Valley.

As the Avro Vulcan entered squadron service with No.83 Squadron at RAF Waddington in July 1957, Britain now possessed the fastest nuclear capable bomber in the world. It seems strange to describe an aircraft which possessed such potential for untold destruction as Britain’s most effective peace keeping asset, however, that is exactly what the Vulcan turned out to be.

Throughout the aggressive posturing of the Cold War, the Warsaw Pact nations were in no doubt that if they dared to launch an attack against a NATO member country, the consequences of the inevitable retaliatory strike would be catastrophic. Without Doubt, during the early years of its service career, nothing represented this doomsday scenario more effectively than the mighty Avro Vulcan.