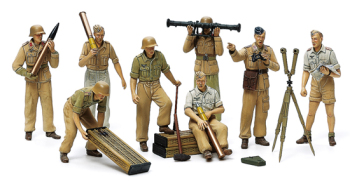 So Many Options!
★The exploits of Rommel and his Africa Corps are well known to students of WWII; this set of highly realistic figures and accessories recreates Luftwaffe personnel assigned to the Africa Corps. ★The 8 figures are in a variety of authentic poses, including an officer barking out orders, non-commissioned officer in shorts, soldiers with shells and a rangefinder, and much more! ★Includes parts to recreate explosive and armor piercing shells, as well as empty rounds, plus shell rack, rangefinder, shovel, hammer and so on. ★Use with any of Tamiya's wide range of 1/35 scale Africa Corps subjects to really add punch to your diorama/model.

About Luftwaffe units in the Africa Corps
Rommel's Africa Corps included a number of Luftwaffe anti-aircraft units, equipped with 88mm guns used not only in ground-to-air situations but also in engagements with enemy armor such as Matildas and M3 Grants. The units' teamwork was a constant boon for the Africa Corps, whether the enemy was airborne or a land vehicle.

About the Uniform
Both Army and Luftwaffe troops in North Africa received tropical uniform. The Luftwaffe version had a large pocket over the left knee, and other small differences. The sand-colored cloth was lighter than the Army equivalent, but faded rapidly in the sweltering heat, leading to many different shades.