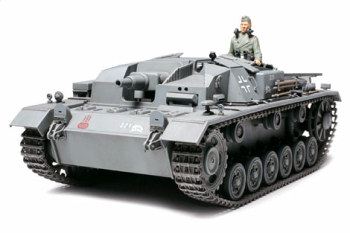 About the Sturmgeschutz III Ausf.B At the beginning of WWII, as the German army was on their rapid offensive, the need arose for a highly mobile infantry support vehicle that could provide heavy firepower to help infantry breakthrough defenses. The Sturmgeschutz III was designed to meet this requirement, with the Ausf.B being the first mass produced variant. Featuring a well armored crew compartment with 50mm front and 30mm side armor and armed with a 75mm StuK 37 L/24 gun, these vehicles were used during the invasion of the Balkans as well as in Operation Barbarossa. As the war went on, the StuG III found itself evolving into a tank destroyer in addition to its assault gun role, and were often used as replacements for actual battle tanks.