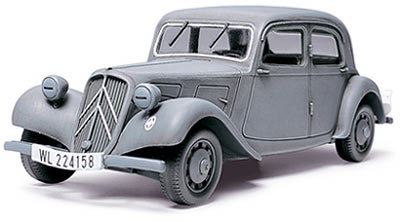 #T32517
$13.50
This item is currently Out Of Stock
Pre-Order Now and we will dispatch your order the moment it becomes available.
Scale 1/ 48 Brand Tamiya Overview

About the Citroën 11CV
This famous French sedan was produced from 1934 to 1957, its nickname in French is “Traction Avant” meaning front-wheel drive. Indeed, the innovative 11CV was one of the pioneers of front-wheel drive. Its versatility led to it being adapted for military use in great numbers, with the French, Free French and German occupying armies all employing 11CV cars. Germany deployed 11CVs to theaters all around Europe, including France, Italy and the Russian Front. German pilots often used the Citroën 11CV as their private car